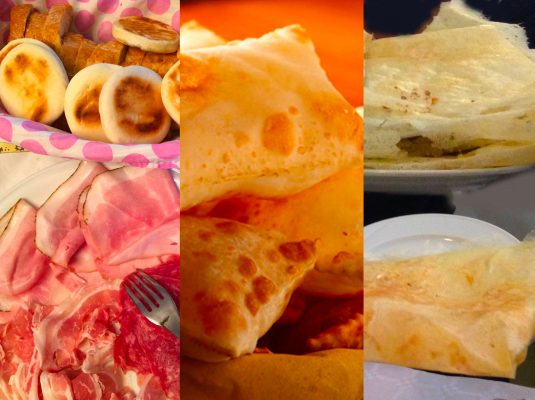 The variety of typical food available on the menus of taverns and old Trattorias of Bologna and Modena is well known to everybody, but there are some dishes that are born to celebrate the union between people, conviviality, friendship. Goodies that, if eaten individually, would lose half their taste. Dishes halfway between a long course meal and street food, which enhance their taste if accompanied, as always, with a glass of wine.

Let’s therefore see 3 typical foods that most represent the tradition and identity of the area between the Modenese and Bolognese Apennines:

Baskets filled with golden rectangles swollen with air, the hands of diners who take them, knives that spread cheeses, crumbs falling, happy laughter. This is the classic image that usually accompanies a dinner of gnocco fritto.
The mixture of this delight is made of water, flour, salt and lard; the dough, spread and cut into a rectangular shape, is then dipped in plenty of oil and fried. The gnocco fritto can be eaten as it is, but the most common (and tasty) habit is to accompany it with creamy cheeses and typical Emilian cold cuts, such as ham, salami and coppa.
The gnocco fritto is essential at village festivals, where endless queues of people wait for it to be fried and gilded at the right point. It is appropriate to specify that in the Bologna area this food is known as “crescentina” and sometimes it can vary for some elements in form and details in the preparation. Both Bolognese and Modenese people care a lot about tradition and culinary identity, so it is better to make sure you use the correct term based on the origin of your interlocutor!

Tigelle are another typical food of the area, a favorite element for conviviality among people. These round scones have a very ancient origin, dating back to the medieval period.
The most correct name to define them in reality is “crescentina Modenese“. The name tigella comes from the terracotta plate in which the dough was originally cooked. The metonymic habit of naming it with the name of the instrument with which it is made is still the most widespread, although it makes the purists of the tongue turn up their noses.
Today the tigella cooking is done with aluminum plates (commonly called “tigelliere”) that can contain more doughs at a time. According to the tradition, the flower of life, an ancient symbol of prosperity and union, is carved on the plates.
The tigelle dough is a composition of water, flour, lard and yeast.
They, as well as the gnocco fritto, are usually served with cold cuts, but in addition, it is customary to fill them with a pesto of pork lard, garlic and rosemary, which makes them even more irresistible.

Among these 3 typical foods, the borlengo is perhaps the one that most represents the area of ​​Modena. It has a medieval origin too; according to one of the various legends that tell the birth of the borlengo, the dish was born when a lady from Modena, in an attempt to prepare a new dish, used too much water for the dough, thus obtaining this new creation. It is possible that the name borlengo derives from  “burla” (joke), a kitchen joke.
The composition of the borlengo is very simple: flour, water and salt. This mixture is then cooked on large plates covered with some oil (called “soli” [suns]).
After cooking, a condiment is added in the middle, which in these areas can never be lacking, that is Modenese pesto (garlic, rosemary and pork lard).
The final aspect is therefore that of a large and very thin crepes, more salty and tasty. In Zocca, on the hills of Modena, there is even a museum-laboratory of the borlengo, where it is taught to young and old to carry on the preparation of this traditional dish.

So, you all foodies, let’s explore the Emilia-Romagna’s Apennine mountains..and their local food and cuisine!