THE HISTORIC RIVALRY BETWEEN MODENA AND BOLOGNA 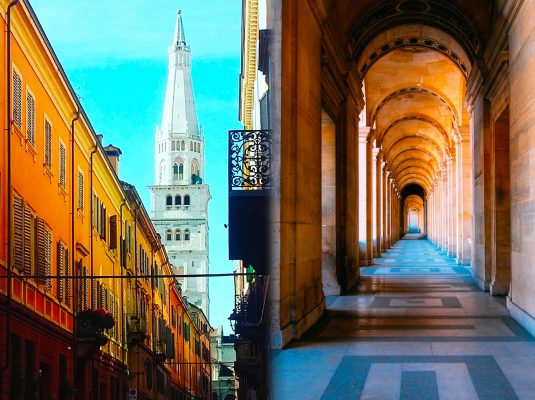 THE HISTORIC RIVALRY BETWEEN MODENA AND BOLOGNA

The Ghirlandina against the Two Towers, Piazza Grande against Piazza Maggiore. Who has the fastest cars? Who’s the best recipe? It is not uncommon to see the spirits of a Modenese and a Bolognese who talk to each other warm up. 50 kilometers along the Via Emilia that hold battles, discussions, challenges.

The rivalry between the two Emilian cities has very ancient origins, back to the early Middle Ages. On the one hand, the faction of the Ghibellini in Modena (supporting the Holy Roman Empire), on the other the faction of Guelfi in Bologna (supporting the Pope). Due to these socio-political reasons, let us mention perhaps the biggest event leading to the historical rivalry between these two cities: the battle of Zappolino (1325), better known as the Battaglia della Secchia Rapita (Battle for the Stolen Bucket). The Modenese writer Alessandro Tassoni recounted this particular dispute in a tragicomic poem, where the two factions fought hard for the property of a bucket stolen from a well by the Modenese troops. Today a copy of the bucket is kept on top of the Ghirlandina tower of the Modena Cathedral, placed high so that the inhabitants of Bologna can see from far the symbol of their defeat.

Nowadays, this rivalry involves Italy’s most important sport, soccer, where the supporters of the two teams never miss the opportunity to praise their opponents. The history of Modena Calcio is a bit unluckier than that of the Bologna Football Club, but over the years many exciting and passionate matches (renamed Derby dell’Emilia) have been played. And from soccer to motors. Bologna and Modena are also famous as the Motor Valley, as the homeland of the most prestigious automotive and motorcycle brands of excellence in the world. On the one hand, the Ferrari prancing horse based in Maranello, on the other the unleashed bull of the Lamborghini with its headquarters in Sant’Agata Bolognese. In addition, the classy Maserati, founded in Bologna but then moved on the territory of Modena.

Since we are talking about Emilia-Romagna, Italy’s food valley, the discussion inevitably involves food culture and local cuisine. Misunderstandings and debates on how to call the gnocco fritto (or crescentina?) local bread and on the truly traditional recipe of the ragù sauce are inevitable between the two counterparts. The most painful key in this context is definitively the true origin of the tortellino. It is well known that it was born in the 13th century in Castelfranco Emilia, today belonging to province of Modena but at the time belonging to the Bolognese dominion. There are several stories about the creation of this stuffed pasta, and one of these is linked to the battle of the Secchia Rapita mentioned above. It is said that the gods Venus, Bacchus and Mars, after witnessing one of the clashes, stopped at the Corona inn to rest. The next day they left the place, leaving Venus still asleep. The innkeeper, at the sight of the beauty of the body of the goddess, was struck and inspired to create the tortellino, with a shape that reminded the navel of Venus.

What is our conclusion? Bologna vs Modena is one of the numerous rivalries that you will find in your trip in Italy. At first glance, it appears as an ardent dispute but underneath it is less “bad” than it seems. As Emilia’s food and wine storytellers, we think that these disputes result from the rich Italian history, give color, passion and identity to the Emilians, and are eventually cancelled by a glass of local semi-sparkling wine in friendship, either this is Bologna’s Pignoletto or Modena’s Lambrusco wine….