Panini, the history of the sticker made in Modena - Emilia Storytellers
Skip to content 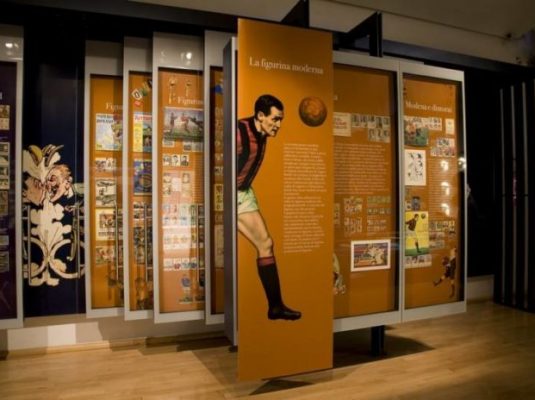 I still remember when I was a child and my father brought me with him to go buying the Panini stickers…. It was an event that I waited anxiously during the all week. I always bought a few packs and I opened them immediately, without waiting a second.

Got it, got it, got it, I don’t have this one! Usually most of the stickers I found were duplicates, but that did not make me sad because I knew that the next day at school I could exchange them with my friends, finally managing to complete the defence line of Bologna Football Club, which for too long had many empty boxes on the pages of my album. Not to mention the years that Roberto Baggio sticker has spent in my wallet, as if it was a holy card.

This and much more have represented for me and for many children of many generations the Panini stickers. Who does not remember that magical bicycle kick that distinguishes the Panini football stickers? That incredible technical gesture from Carlo Parola (player of Juventus and National team) has become an icon that has crossed all boundaries, reaching all parts of the globe, creating an immediately recognizable image.

All of this had as a starting point Modena, where in 1961 the Panini brothers, Giuseppe and Benito, founded the Fratelli Panini Distribution Agency. Strengthened by the experience gained at their mother’s newspapers kiosk in Corso Duomo in the center of Modena, the two, after having accidentally found a batch of old cards of the Milanese “Nannina editions”, decided to commercialize this collectible reduced adhesive print with the faces of Italian football players.

It was the beginning of something historic and innovative. Two years later, the business expanded with the entry of the other two brothers, Umberto and Franco, and began to become the historic company that still today is a leader in the sector. The management remained familiar until 1988, passing then to two different foreign companies and returning to be 100% Italian in 1999. For some time the property has changed, but the classic logo, a paladin with a long spear (which refers to the pseudonym used by Giuseppe in the world of crosswords, another great passion), has remained unchanged, as it is still nowadays.

The Panini group today has branches in Europe, USA and Latin America, with a distribution in more than 120 countries, but its beating heart remains in the beautiful city of Modena, in the Emilia-Romagna region.

As an editorial group, Panini also publishes comic books (Marvel and Disney), manga and other magazines. It is incredible how after so many years this company is still able to make us dream and travel with imagination.

This year the collection of football players stickers is going to be the 58th. The first year of production a pack cost 10 old liras (equal to about 0.5 euro cents) and contained only 2 cards. An investment for the future, if we think then that some stickers today are valued at auctions for more than 100 euros!

However, the passion for these peculiar objects overcame football, involving in the following years also cartoons, comics, movies and television series, thus increasing in production numbers; on average, in the last few seasons, 1 billion packs per year have been produced, that is 6 billion pieces, almost one for every inhabitant of the earth!

A few years before his death, precisely in 1992, Giuseppe Panini donated his entire collection to the city of Modena. This act of generosity was only one of the many accomplished by the entrepreneur, who on many occasions had already shown that he loved his own city, as when he organized summer projections of historical photographs in Piazza Grande, or when he decided to found the Panini Sports Group, one of the most important volleyball companies in the world.

In his honor, in 2006 the Municipality decided to establish a Sticker Museum, which hosts the entire  donated collection. A very large miscellany, which has about half a million pieces, ranging from small color prints, matchboxes, letterboxes, menus, calendars, hotel labels and obviously stickers. Inside the museum you can lose yourself among “large closets to browse”, which tell the story from the dawn of the chromolithographic press up to the contemporary sticker. The museum, located inside the Palazzo Santa Margherita, consists of 6 permanent sections, to which are added temporary exhibitions that run several times a year.

The myth of the Panini stickers is the umpteenth excellence that is added to the “album” among all the others belonging to Modena. A truly vast collection, but easy to complete if you visit it with enthusiasm and desire to discover, flipping through all its pages.

We hope this article has given you one more reason to visit Modena, which is already a top destination for food lovers.  Foodies from all over the world come here to taste Traditional Balsamic Vinegar. Motor and car lovers come for famous Ferrari and Maserati car brands. Globe-trotters seeking supreme food experiences come for the unique culinary trip offered by  Chef Massimo Bottura, two times winner of the World’s 50 Best Restaurants prize with restaurant Osteria La Francescana.

Would you like to explore the historical centre and taste the finest local foods? Join our Modena Walking Food Tour