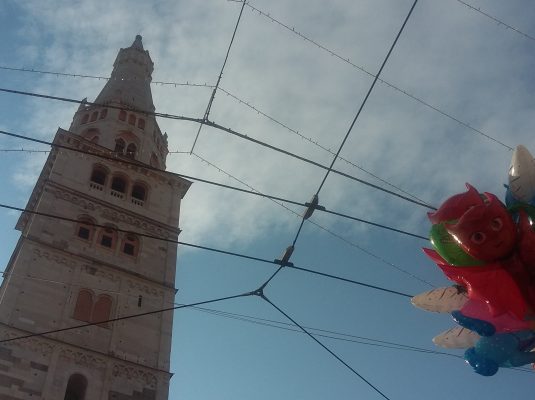 Not everyone knows that the remains of San Geminiano, the patron saint of Modena, are preserved inside the crypt of the majestic Duomo that dominates Piazza Grande.

In his honor, on the 31st of January a city festival is celebrated, a day that all the people of Modena await with great impatience; all the most beloved places in the historic center are dressed up for the celebration and people pour into the streets with family and friends.

The figure of San Geminiano is closely linked to the city of Modena. Born in nearby Cognento in 313, he then became around the 350 bishop of the city, elected by the people for his humility, goodness and love for the poors. Geminiano was an esteemed evangelist and exorcist (according to the chronicles the best in the Western Roman Empire); the evidence is depicted on a bas-relief on the architrave of the Porta dei Principi of the Duomo, where the saint is seen intent on making an exorcism on the daughter of Emperor Gioviano in Constantinople. His figure is linked to several miracles and stories, in which Geminiano earns the title of protector of the people of Modena.

There is no citizen who does not know when Geminiano grabbed by the hair a child who was falling from the Ghirlandina tower thus saving his life, or when in 1511 he appeared in the form of a frightening old man to Charles D’amboise and his French troops who were marching on Modena, scaring them to such an extent as to make them recede precipitously.

The most important and remembered legend (even if anachronistic) is certainly the one that occurred during the barbarian invasions in 452, when he was able to protect Modena from the arrival of Attila and his Huns, willing to ransack the city; the saint raised a thick fog that made impossible to identify the urban agglomeration, saving in this way the population from the barbaric horde.

On January 31st, every year, the sarcophagus containing the bones of the saint recomposed and dressed in liturgical clothes is opened, so that everybody can pay homage to the person who has long protected the Emilian city. The Duomo keeps his relics for more than 1600 years. In fact, the building as we know it today is the third construction built around the tomb of San Geminiano: at the beginning the citizens built a small temple, then a church and finally in 1099 the work that would lead to the majestic building so admired began. In this same place late in the morning it is celebrated the Holy Mess by the archbishop; as tradition, two other delegations of cities which have Geminiano as patron saint attend to the ceremony: one from Pontremoli and one from San Gimignano, two towns in Tuscany.

But the most awaited event of the day by locals and tourists is the historical parade, a costume parade preceded by the local marching band all around the streets of the city center adorned with flags and banners. The figures of the city authority march from the Town Hall to the Cathedral, followed by the surrounding crowd. The municipal valets, dressed in Renaissance costumes with the symbolic colors of the city, yellow and blue, bear large candles and the oil for the lamp that serves to fuel the perpetual flame that burns in the crypt of the saint.

In addition to this happening, the most trained ones can try their hand at the Corrida di San Geminiano, a marathon that stops at the birthplace of the saint and returns to the city, for a total of 13.5 kilometers.

For all those who want to be tempted by local delicacies, the finest food and wine specialties, the streets are full of street vendors, stands and street food stations that offer the typical food of Emilia- Romagna and Modena, from gnocco fritto to tigelle, even some “take away tortellini”.

It is an opportunity for all foodies who want to enjoy the day at the best; an occasion which will be virtually impossible to resist.

These last winter days have been quite cold, and weather forecasts for the 31st of January do not seem to be better, but we hope the sun will shine on the city of Modena for this special event.  In any case, locals and visitors can warm them up by enjoying a glass of Lambrusco wine or, and if this is not enough, they can go to one of the numerous traditional Trattorie restaurants to enjoy Tortellini in brodo, a super typical soup with stuffed-pasta that will make them feel like real Modenese people!