A PASSION FOR CHERRIES - Emilia Storytellers
Skip to content

A PASSION FOR CHERRIES 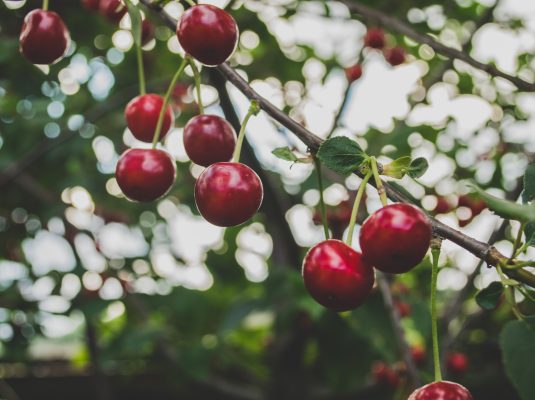 A PASSION FOR CHERRIES

How’s the cherry so red? How come?

And she found herself

When we hear the name of the town of Vignola we cannot bring back our memory to images of a bright red color, crates full of that fruit so sweet that we would like to savor on a hot sunny day. The “Ciliegia di Vignola” (Vignola Cherry) has become a symbol of recognition and pride, so much so that since 2013 it has even obtained the important recognition of I.G.P. (Protected Geographical Indication), confirming its infamous quality.

The renowned “Ciliegia di Vignola”, to be considered as such, must possess certain well-defined characteristics, which take into consideration aspects related both to the territory, both to appearance and taste. The real Vignola Cherry is grown on the left side of the Panaro river, at a height between 100 and 950 meters of altitude. This soil is fertile and perfect for growing cherries, due to the numerous flooding of the river over time and the cool climate with abundant rainfall. This specific area includes 31 municipalities in the provinces of Modena and Bologna.

Right on this shore, between the end of March and the beginning of April, you can admire many trees that bloom and fill the air and the land of rose petals, creating a unique landscape.

Between the month of May and June these same trees are colored in red, full of cherries ready to be picked up by skilled hands and carefully placed in wicker baskets, as per tradition.

There are different varieties of Vignola Cherry, classified according to color, size and pulp; the two most typical and representative of the territory are the cherry “Mora di Vignola” and the “Durone Bigarreau”, with a harder skin and with a typical dark red color, almost black.

Proud of its important production, Vignola dedicates two celebrations to its cherries: the first, in April, is the “Festa dei ciliegi in fiore” that lasts three weeks, in order to admire precisely the beauty of the blooming of the enchanting trees colored in rose; the second one, in June, “Vignola è tempo di ciliegie”, where local agricultural producers and ancient traditions are told through exhibitions, featuring also themed showcases, new agricultural technologies, organic productions, PDO products and tastings.

And it is precisely in festivals like these that you can taste the best gourmet products that have the cherry as a protagonist.

Due to its irresistible sweetness, cherry is often used in cooking, especially for the preparation of desserts, such as pies, jams and ice-creams. You can even dare something more, using them as ingredients for the preparation of risottos, vinegars or liqueurs. Besides being a delicacy, cherries are a source of vitamin A and C, minerals (iron, potassium and calcium). They also possess diuretic, purifying properties and they help fight skin aging.

So, let yourself be tempted by cherries!